What is wheelchair rugby

Wheelchair rugby is a team sport for male and female athletes with a mobility-related disability in at least three limbs. It is a unique sport created by athletes with a disability that combines elements of basketball, handball, and ice hockey. The object of the game is to carry the ball across the opposing team’s goal line with the control of the ball.

1977 : Wheelchair rugby was invented in Winnipeg, Canada by a group of quadriplegic athletes who were looking for an alternative to wheelchair basketball. They wanted a sport which would allow players with reduced arm and hand function to participate equally.

The basics of wheelchair rugby
Who can play ?

To be eligible to play wheelchair rugby, individuals must have a disability which affects the arms and legs. Most players have spinal cord injuries with full or partial paralysis of the legs and paralysis of the arms. Other disability groups who play include cerebral palsy, muscular dystrophy, amputations, polio and other neurological conditions. Men and women compete on the same teams and in the same competitions.
Players are assigned a sport classification based on their level of disability ; teams must field players with a mix of classification values, allowing players with different functional abilities to compete together.

All players are assigned one of seven numerical sport classes, which is a measure of their functional ability. This number ranges from 0.5 (the least function) to 3.5 (the highest level of function) and is calculated in 0.5 increments. To determine an athlete’s class, classifiers observe athletes as they perform a variety of movements – e.g. the athletes’ limbs  for strength, flexibility, sensation and muscle tone ; and athletes’ trunks for balance and the ability to bend over, rise up and rotate. The athlete is then observed performing both ball handling and wheelchair skills prior to game play and during game play, if necessary.
The total value of the sport classes on court for each team must not exceed 8.0 points. Teams are allowed an extra 0.5 for each female player they have on the court.

The role of the players :

A player’s classification often characterizes which role he or she has the floor. Players are often split into low-pointers (least fonction) with and high-pointers (highest level of fonction). High-pointers usually handle the ball, while low-pointer’s primary job is to block the opponent’s chairs.  It isn’t that black and white though, and the tactical dimension of putting together competitive lineups is a science that occupies the minds of coaches regularly.

Athletes compete in manual wheelchairs that are specially designed for the sport. The rules include detailed specifications for the wheelchairs to ensure safety and fairness ; in international competition, all wheelchairs must meet these requirements to be considered legal for play.
There are two types of wheelchair rugby clairs : offensive and defensive chairs. Offensive chairs are set up for speed and mobility and contain a front bumper and wings to prevent other wheelchairs contain bumpers set up to hook and hold other players.

Wheelchair rugby is a team sport for male and female athletes with a disability. It is played indoors on a regulation sized basketball court, with a ball similar to a volleyball. The aim is to score goals by crossing the opposing team’s goal line while in possession of the ball. The team scoring the most by the end of the game is declared the winner.
Here are some basic rules that are good to know when watching the games.

• A game in wheelchair rugby can never end in a tie. If a game is tied after regulation the teams will play extra time periods of three minutes until a winner is found.
• If a rugby chair breaks during the games the player has only one minute to repair it, or he/she will be substituted. He/she can re-enter the game when the equipment is fixed.
• All teams at national team level bring their own specialist mechanics to ensure that players are always rolling 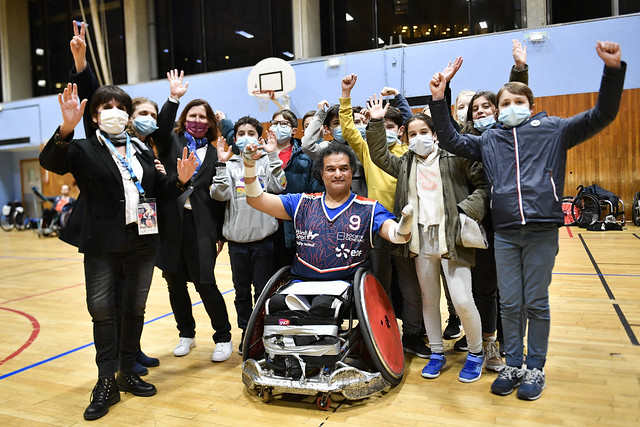